Going solar is gaining traction in recent times, what with the price of solar panels coming down substantially in the past decade. The numerous government incentives and rebates have only made the deal more lucrative.

Switching to solar power has always been a top priority for environmentally-conscious consumers. And, when you add to this the enticements of energy independence and a chance to bring down the energy bill to zero, it cannot get better.

However, not all can afford the steep upfront cost of solar installation. And, this is where the rebates and incentives come in handy. They are meant to reduce the financial burden on going solar considerably.

Incentives and rebates are offered by governments as an encouragement to adopt solar technology for homes and businesses. These come in the form of federal tax credits, one-time rebates, property tax abatements, and performance-based rebates from federal, state, and local governments and utility companies.

Encouraging homeowners and businesses to convert to clean energy helps utility companies and governments ramp up the share of solar energy in energy production and consumption and meet their clean energy goals. It is a win-win situation for all concerned.

Read on to learn more about the incentives and rebates offered to homeowners and businesses for solar installations in the United States. 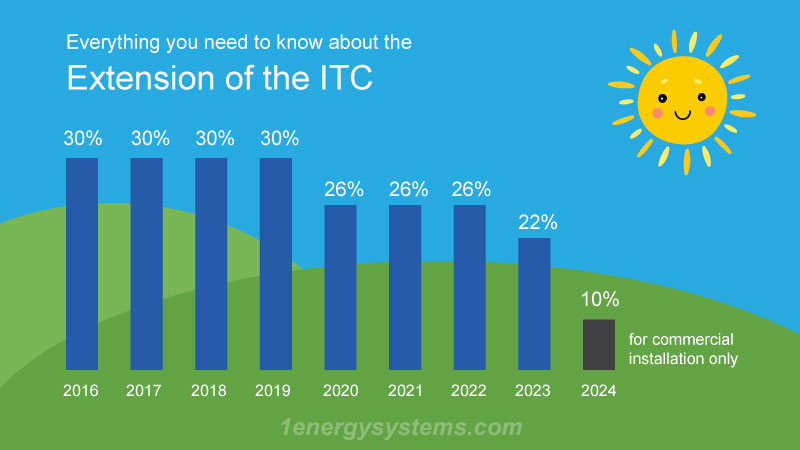 Incentives and rebates for solar

Popularly known as a federal solar tax credit, ITC is an incentive from the federal government in the form of an income tax credit. This allows homeowners and businesses to claim a fixed percentage of the cost of the solar system including installation fees as an ITC at the time of filing tax returns.

Similar to the federal solar tax credit, some states offer a tax credit for installing residential and commercial solar systems. These state-specific tax credits are usually in addition to the one offered by the federal agency and do not reduce ITC.

However, availing state tax credit will increase the income for computing federal income tax and this will result in taxation of the credit amount at the federal tax level.

Local administrations, utility companies, and other region-specific agencies offer cash rebates for installing solar. Cash rebates are given for a fixed duration to motivate more people and increase the solar installations in their jurisdiction. This is done mostly to help these agencies meet their clean energy goals.

Once this special drive brings in a certain number of solar systems and the target is achieved, these limited-time offers are typically withdrawn. From the perspective of a solar buyer, every little bit helps. These cash rebates can help in recovering 10-20% of the system cost.

The REC is a certificate given for the production of one megawatt-hour of solar power. The RECs can be traded on the REC market. Utilities purchase the RECs issued to add to their tally of solar energy generation goal.

The pricing of RECs is based on demand and supply in its market. The less solar energy generation and tougher solar target to meet in an area, the higher the price of REC. This means the price of REC will be lower in states with higher solar awareness.

These are incentives offered for the amount of energy produced (in kWh) for a specified period. Some PBI programs insist on installing solar systems manufactured within the state.

Unlike RECs, PBIs are fixed-rate incentives and the price is not determined by the market forces. While in some states, PBIs replace net-metering incentives, in others, these two incentives co-exist.

Solar shoppers who do not have the capital for a cash purchase and do not want to let go of the incentives and rebates offered for owning the solar system will find solar loans the best bet. Solar loans are offered by a wide range of agencies – from traditional banks and solar panel manufacturers to utility companies, NGOs, and credit unions.

Availing solar loans for the purchase of the system doesn’t take away any of the benefits it enjoys otherwise. Moreover, solar loans are heavily subsidized with low-interest rates to promote solar energy. Most of them come with zero-down payments and can be either secured or unsecured.

Some states offer exemption for solar installations from sales tax. Again, an incentive to increase the solar power output in the state, this tax exemption can bring down the cost of the system substantially.

This is a bonus for businesses considering going solar. The Modified Accelerated Cost Recovery System (MARCS) allows businesses to write off the value of the solar power system. MARCS is a depreciation method for recovering the business’ investment in physical properties such as a solar system over a fixed period by yearly deductions. This is allowed for the purpose of taxation.

Accelerated depreciation for solar systems helps in reducing the tax burden of the businesses, thereby aid in recovering their original cost and accelerating their return on investment. Solar system qualifies for a cost recovery period of 5 years under the MARCS. This can bring down the system cost by an extra 30%.

Besides the ITC, there are numerous region-specific solar incentives and rebates available for homeowners and businesses. Many states, counties, municipalities, and utility companies offer solar rebates and incentives for solar installation and solar power generation.

The Database of State Incentives for Renewables & Efficiency is a comprehensive source of information on solar incentives and policies and energy efficiency in the United States. The DSIRE is operated by N.C. Clean Energy Technology Center at N.C. State University.

California Solar Initiative (CSI) was a solar rebate program for electricity consumers of California utility companies PG&E, SDG&E, and SCE for installing residential or commercial solar systems. Created by the state’s legislature in 2006, the CSI program ran from 2007 until 2016. Phased out two years ahead of schedule, the program was initiated to install 2,000 MW of solar power in the state.

The program was phased out before time as it met all the goals much earlier than anticipated. The success of the program lies in the fact that even after it was phased out, the rate of solar projects coming up has not diminished. The smooth phaseout of the CSI program is attributed to its unique structure – on attaining energy capacity milestones, the incentives were gradually reduced.

Who is eligible for solar incentives and rebates?

The ownership of the solar system is the basic criterion for claiming the solar rebates and incentives. The rest of the conditions differ for different incentives. However, some of the common factors to qualify for solar incentives are:

While federal solar tax credit can be availed only against federal income tax owed, area-specific incentives are available only for homeowners and businesses in prescribed locations. Some states offer solar incentives for low-income energy consumers.

Are solar leases and PPAs eligible for solar incentives?

The short answer is no. The ownership of the solar panel system is the basic condition for availing incentives. In the case of solar leases and PPAs, the solar installation is owned by a third-party, making you ineligible for the solar incentive. On the other hand, the installation companies who own the system can claim the incentives due to them.

They say every cloud has a silver lining. It is often found that the states offering solar incentives have lower electricity rates for those choosing solar leases and PPAs in comparison with states without incentives.

For a home built for sale, is the builder eligible for the ITC?

No. The builder is not eligible for an ITC as he is not the owner of the house or resides in it. He cannot claim the commercial ITC given for a rental property as well. However, the new homeowner will be entitled to n ITC, provided he uses it as his residence.

Which is better? Secured or unsecured solar loans?

A secured solar loan requires an asset as collateral while unsecured loans are given without collateral. However, the advantage of lack of collateral for an unsecured loan is offset by higher interest rates to compensate for the increased risk.

Is depreciation calculated after ITC?

Incentives and rebates are aimed at lessening the financial implication of going solar. As solar energy systems become more and more affordable, the temptation to switch to solar power will be greater. As more energy consumers make the transition, the states and country as a whole will benefit, besides the individuals and businesses.