As the threat from global warming and climate change worsens with each passing year, our search for clean energy is intensifying.

Even as new technological advances have made solar and wind power cheaper and more accessible, there is enough room in the power generation scene for new players to make their mark. One of the promising discoveries to help us bring down our dependence on fossil fuels is tidal wave energy.

Our oceans hold an unimaginable abundance of energy, hidden in their turbulent waves. Tossing and turning 24×7, waves have incredible amounts of kinetic energy. All we need is efficient technology to harness this ocean energy.

The tidal turbine is the new kid on the block, though the idea in itself is not new to humans.

How much potential does tidal wave energy hold for the future? Can it become the next big thing and ultimately be capable of replacing fossil fuels? What are the benefits of using tides for energy? The answers to these questions depend on the efficiency, affordability, and universality of tidal wave energy.

The ideal way to gauge the potential of new technology is to lay out its pros and cons.

This article is an attempt at understanding more about tidal wave energy and figuring out the answers to some of these questions. You will also find here tidal energy pros and cons.

What is tidal energy?

Do you know that about 71% of the earth’s surface is covered by water? And the oceans hold a whopping 96% of the earth’s water. The rotation of the earth on its axis, the gravitational force, and the pull exerted on the earth by the sun and the moon make this water move vigorously.

The kinetic energy contained in the ocean’s waters can be harnessed to turn the rotors and generate electricity. Diverse technologies are available to capture the tidal wave energy to turn the rotors. These include tidal turbines, tidal fences, tidal stream generators, and tidal barrages.

Though water is the common factor in hydropower and tidal wave energy, the former needs to convert the potential energy in the stored dam water into kinetic energy by making it flow down. However, in the ocean’s water, kinetic energy is already present as it is always in motion.

Here is a brief description of how some of the technologies used in harnessing tidal wave energy work.

Similar to a wind turbine, a tidal turbine generates electricity when water passing over it turns the rotors of the turbine. This is one of the basic systems and hence cheaper than the rest. However, it’s low on efficiency.

Similar in construction and design to a tidal turbine but comes with a different rotor. This has an arrangement similar to a turnstile, making the rotor blade spin with the water flow. Though there are various versions of a tidal fence, the most common is one with a vertical spinning cylinder.

Tidal streams are ocean currents produced as a result of tidal ebbs and flows. The tidal energy generator captures the kinetic energy in the tidal streams to produce electricity.

One of the most efficient devices to harness tidal wave energy, tidal barrages require a dam-like construction to create a bottleneck for increasing the speed of the water flow. This is similar to hydroelectric dams.

This is a new technology that is not yet tested commercially. This is a floating device with a turbine underneath. This eliminates the need for construction on the ocean bed, making it cheaper and more environment-friendly than others. 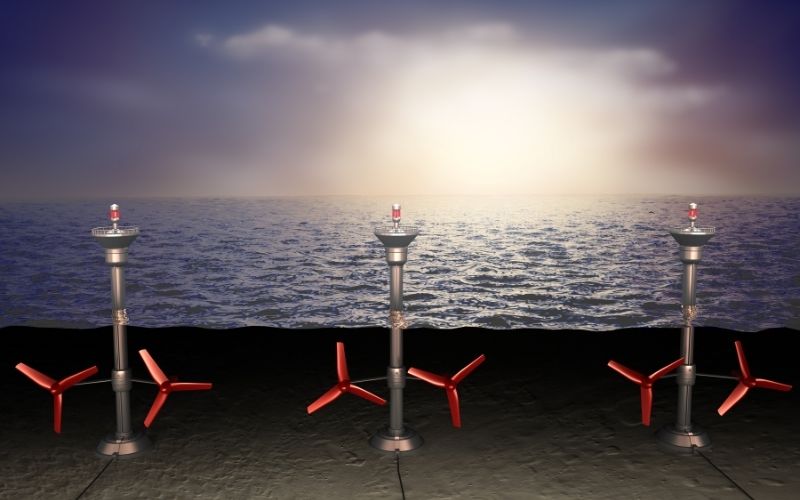 The energy present in the ocean’s water is inexhaustible. It doesn’t get depleted on use. Harnessing tidal wave energy in no way reduces the kinetic energy contained in the seawater in the present or the future.

As we are searching for alternative energy sources to replace the highly harmful fossil fuels, tidal wave energy is placed high up on the list of renewable energy sources as it doesn’t contribute to greenhouse gas (GHG) emissions or air pollution.

GHG emission is the main contributing factor to global warming and climate change. Air pollution is creating unforeseen levels of health hazards across the world. Any energy source that can bring down both, is considered an excellent replacement for fossil fuels.

Both solar and wind power are viable alternatives to fossil fuels. However, their main disadvantage is their unpredictability, which renders them unreliable. Tidal wave energy, on the other hand, is more predictable than any of the renewable energy resources.

Tides follow a fixed pattern based on the phases of the moon. The predictable nature of high and low tides makes tidal wave energy one of the most reliable among all the renewable energy sources.

Tidal energy is similar in technology to wind power. In both, the energy harnessed is used to turn turbines, which in turn produces electricity. However, the energy contained in the water is much higher than that in the wind and hence it is possible to generate more energy using tidal wave energy.

Water is almost 800 times denser than air. The water molecules are packed closely together. The saltwater weighs 64 pounds/cubic foot. This means a tidal turbine can generate more energy than a wind turbine of similar dimensions.

Wind turbines can produce electricity only when the wind is blowing at considerable speeds. However, with tidal turbines, this is not the case. Even when the water flow is low or below normal, tidal turbines can continue to generate sufficient energy due to the higher density of the water.

1. It is location limited

All oceans have water but not everywhere the tides are strong enough to take advantage of. This restricts the locations suitable to install tidal energy plants. Moreover, as these are offshore installations, a coastline is a necessity. All these place restrictions on potential sites for tidal power stations.

One of the most important conditions that make a tidal energy plant commercially viable is the difference between low and high tides. These additional specifications make it difficult for the universal implementation of tidal wave energy.

Most of the commercial tidal energy plants in operation now use tidal barrages. These low-walled dam-like structures are highly expensive to build. The cost factor is a major deterrent in the large-scale adaptation of tidal wave energy.

3. It has environmental consequences

Tidal wave energy is indeed a zero-emission technology. However, its other aspects can have negative effects on the environment. Such as the destruction of the neighboring ecosystem.

Tidal turbines have similar disadvantages as wind turbines – bird collision. In addition, it also has to deal with marine life collisions. Along with the seawater, marine creatures including fish could flow into the turbine blades, leading to serious harm.

And like wind turbines, tidal turbines also make a humming sound. Though this is low-level noise pollution, it can disturb some of the marine life like seals.

Tidal barrages, like hydroelectric dams, can create artificial barriers, discouraging the free movement of marine life in the neighborhood and preventing the migration of sea creatures. Just like their land counterparts, these ocean structures can cause flooding of areas along the coastline, leading to permanent alteration of the landscape.

For instance, if the high tide happens during night hours or at noon, the plant will generate electricity when the demand is the lowest. And it is incapable of meeting the high energy demand in the mornings and evenings. So, even if it is predictable, limitations of tidal energy do exist.

However, if a battery is used to store the energy generated for later use, tidal energy plants will be able to manage the energy demand more efficiently.

As we continue our search for better and more efficient technologies to replace fossil fuels, the future of tidal energy looks promising. With newer methods and devices to harness the energy hidden in the ocean’s waves, the future holds bright for evolving technologies like dynamic tidal power.

At present, there are very few tidal farms in operation worldwide. Sihwa Lake Tidal Power Station in South Korea is the largest among them with a capacity of 254 MW. the second largest at La Rance, France has a capacity of 240 MW. Canada, China, Russia, and South Korea have smaller tidal energy plants.

The United States doesn’t have a commercial tidal power plant, though Cook Inlet of Alaska and various locations in Maine are being tested for feasibility.

Tidal energy systems though high on upfront cost are long-lasting, the average lifespan being 75-100 years. Construction and environmental challenges notwithstanding, tidal energy is set for phenomenal growth in the coming decades.