We all know what a home solar installation looks like – a few panels atop the roof or in the yard. Can you imagine what a solar farm will be like?

When we are talking about the production of solar energy on a commercial scale, hundreds and hundreds of solar panels need to be lined up to capture large amounts of sunlight. This means it would be spread across large tracts of land.

The emphasis on switching to clean and green energy is compelling countries worldwide to set up bigger solar farms more than ever before. While the percentage of solar energy and thereby renewable energy in energy production is going up at a steady pace, it also comes with environmental and other concerns. Problems with solar farms are a reality.

Solar energy generation on a large scale comes with both positives and negatives. Read on to learn more about the pros and cons of solar farms.

Pros and cons of solar farms: An overview

Let’s understand the advantages and disadvantages of solar farms in detail.

It is a fact that we are fast running out of fossil fuels. In our quest to find alternative energy sources, we gave importance to renewable sources. Solar energy is one of the most prominent energy sources that are renewable.

Sun’s energy is available in plenty in most parts of the world and it doesn’t get over because we are using it to generate solar power. It is estimated that an hour of sunlight that the earth receives is enough to meet our energy demands for a year. This makes solar farms a step in the right direction.

Another major setback of fossil fuels is the greenhouse gas (GHG) emissions it generates and its consequences like global warming and climate change. Though scientists have been warning for decades, the recent turn of events across the world adds urgency to take constructive action.

Solar energy is one of the greenest forms of energy sources. The energy generation itself is 100% free of GHG emissions. Solar farms can bring down emissions and help in containing the devastating effects of global warming.

Burning fossil fuels is a major source of air pollution, affecting the health and well-being of all living things, including human beings. Even among renewable energy sources, we have biomass that contributes considerably to air pollution. Solar energy is a winner in this regard.

As more solar energy is generated by setting up solar farms, it is possible to bring down the levels of air pollution and improve the air quality.

Eases up our reliance on fossil fuels

As our scientists realized the adverse effects of burning fossil fuels, the search for alternative energy sources began. Renewable energy sources like solar power have been gaining in popularity ever since.

With improvements in technology and affordability, countries worldwide began setting up solar farms to ease up our dependence on fossil fuels. Solar farms are increasing the share of alternative energy sources in energy production.

Solar panels don’t come cheap as the semiconductor materials used in their production are expensive and not easily available. Land requirements and other infrastructure needs raise the expenditure of setting up a solar farm. Commercial power generation always necessitates huge investment, irrespective of the energy source.

Solar installations have the longest lifespan among renewable energy sources. They can continue to generate electricity for 30 to 40 years as they rarely get damaged or need much maintenance.

Despite the huge cost of setting up a solar farm, its long lifespan together with low maintenance cost makes them financially viable.

Solar power installation doesn’t involve a turbine for energy generation, unlike other sources. It has no moving parts. This means no wear and tear or breakdowns or damages. Once the solar panels are installed, they continue to generate solar power as long as the sun is shining.

Power generation using fossil fuels is a high decibel activity. Even among renewable energy sources, noise pollution is a matter of concern. This is one of the main drawbacks of wind energy. Solar farms generate electricity silently.

Improves infrastructure in the region

As large tracts of land are required for setting up solar farms, they are located in remote locations. The movement of machinery and equipment for the solar farm necessitates good roads and connectivity. All this leads to the development of the entire region.

Solar farms provide job opportunities to the local population. This in turn helps in reviving the economy of the region. The economic activity is more at the time of setting up of the solar farm. 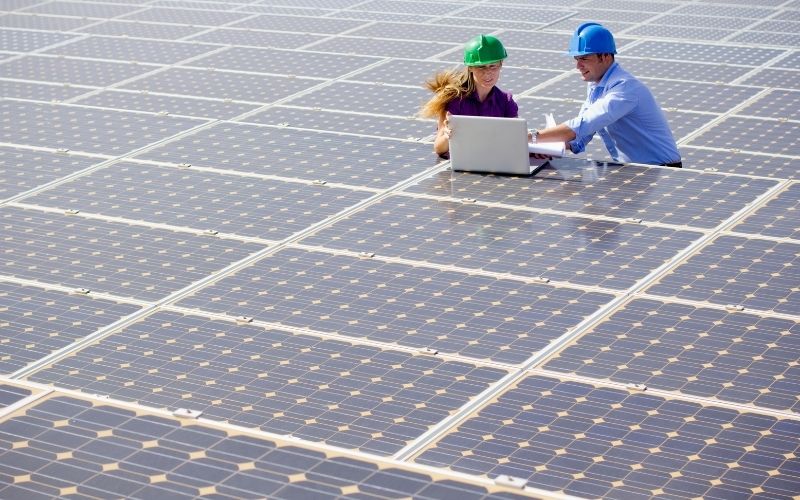 There is no denying that solar farms are expensive to set up. However, the same is true for other energy sources as well. The longevity and low maintenance give solar farms an economical advantage.

Though solar energy production itself is clean and doesn’t harm the environment in any way, the manufacture, transportation, and setting up of solar farms contribute to GHG emissions and air pollution. Moreover, the decommissioned solar panels contain toxic materials and result in land and water pollution.

Related: 5 Disadvantages of Solar Energy to the Environment

Dependant on the availability of sunlight

This is one of the major drawbacks of solar energy. Solar farms can generate electricity only when the sun is shining. This contributes to its low capacity factor.

There is no escaping it. Solar farms are spread over large areas as space is needed for setting up solar panels. This means solar farms often come up on cultivable land. Solar farms on agricultural land render large tracts of land unusable and can impact food production.

This is a serious concern of solar farms. Once its lifespan is over and the solar panels become too low on efficiency, they are decommissioned. These turn into solid waste. The toxic substances present in the solar panels can pollute the land and water if they are not disposed of responsibly.

Solar farms can work to their maximum capacity only when sufficient sunlight is available. When there is high energy demand, it is not possible to ramp up production as in the case of coal-fuelled thermal power plants. When the energy demand is low, there is no system in place to lower energy generation.

The best among the solar panels made from monocrystalline silicon has an efficiency of about 20%. This means it can convert only 20% of the incident sunlight. Polycrystalline and thin-film solar panels come with further lower efficiencies. Meanwhile, the efficiency of thermal power plants hovers between 35-50%.

The presence of a large solar farm is a sore sight for the eyes. It robs the entire area of vegetation. All you get to see are rows and rows of solar panels. Most people would consider this unsuitable to set up their homes. Consequently, property prices take a hit. The negative effects of solar farms on property values are a fact.

One of the unfounded solar farm complaints is about the dangers of living next to solar farm. However, many prominent members of the scientific and medical fraternity have reassured the general public that there is no evidence of health risks involved in living next to a solar farm. They are absolutely safe in residential areas.

Use of rare natural resources

Solar farms use high-efficiency solar panels made using monocrystalline high-grade silicon. Though sand or silicon is abundant, converting it for use in panels is an expensive and energy-intensive process. The newer solar panels use polycrystalline silicon or rarer materials like Cadmium telluride (CdTe) and copper indium gallium selenide (CIGS). Their availability is limited.

Solar power is a viable alternative to fossil fuels. It is renewable, sustainable, clean, and can help in reining in global warming and climate change. Even something as promising as solar power has its negative side. There is no escaping that.

Ultimately, it is up to us to weigh the pros and cons and find the best way forward. Solar power definitely has a place in our future.